Dogs Got Their Day at Napa’s Walk for Animals

Dogs Got Their Day at Napa’s Walk for Animals

Posted on August 3, 2015 by Dog Nation No Comments

So it was Sunday morning that nearly 350 local dogs — and 500 other marchers of the two-legged persuasion — took to the downtown streets for Napa Humane’s fourth annual Walk for Animals. Within the mass of pets and owners that looped from Main Street to First, Randolph and Second were an assortment of friendships forged one by one.

Some of the owners’ stories, like that of Debbie Cates, had origins as mundane as a visit to a pet-supply store.

“I went to the Petco one day to find toys for my two cats — and I came home with her,” the Napa woman said, pointing to Rosie, her year-old Chihuahua mix. Like many other dogs in the procession, Rosie was gaily costumed for the occasion — in an orange duck-head coat, bought at the same store where Cates had first seen her.

As the marchers gathered on Main Street for the start of the walk at 8:30 a.m., Cates observed the kibitzing of dogs — sniffing one another at both ends, sometimes barking excitedly — and wondered if the festive spirit was rubbing off on her own pet. 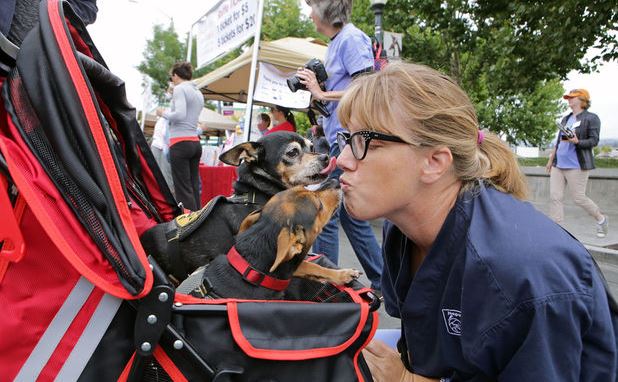 “She’s well socialized, used to other dogs — seems to know this day is about her, that it’s special to her,” she said while holding Rosie. “It’s just neat to see her looking around, looking happy.”

Launched in 2012, the Walk for Animals has become the year’s main promotional event for Napa Humane, which uses registration fees and donations to support its low-cost spaying and neutering programs as well as a program connecting pets in the Napa County animal shelter to prospective owners. Sunday’s procession raised more than $73,000, according to Jane Albert, the group’s executive director.

More than a fundraiser, the downtown walk has evolved into a kind of block party for animals — and a time for many of their human friends to catch up as well.

“Amazing how many people are here that we know,” said Bob Stevenson, who with his wife, Lisa, arrived downtown with their 3-year-old rat terrier, Lola — decked out in a black-and-pink tutu patterned in skulls and crossbones.

“The animals get to meet each other, and we get to meet friends we haven’t seen in a while – and we meet new people, too.”

One of the youngest marchers in Napa was Odin, a 4-month-old pit bull sent to the Petaluma animal shelter where Zabrina Parks works. After just a month together, the American Canyon resident already was friendly enough to play the social butterfly at the Walk for Animals, with people and other dogs alike.

“He just wants to play the whole time,” Parks said with smile as Odin strained at his leash, trying to greet a woman taking his picture. “He’s just acting like, ‘Let me off the leash and let me play with all these dogs!’”

After the half-hour procession, dog owners took their celebration to Veterans Memorial Park for a dog-and-owner dance show, animal trick demonstrations and even a tongue-kissing contest. Along the nearby streets, visitors could visit stands as serious-minded as a “hot-car” exercise to teach people not to leave pets inside vehicles — or as lighthearted as the cornhole-style booth with simulated bags of poop, a game designed to encourage owners to clean up after their canines.

My name is Elke Vogelsang aka Wieselblitz, I’m a people and pet photographer working and living in Germany. I’m absolutely crazy about dogs. Thankfully, I am able to combine this craziness with my other passion, photography. With my dog portraits I try to explore the different expressions and characters of[…]

Keep Your Dog Healthy With This Simple Dog Care Tips

When you invite a dog into your house, you are getting more than an animal. This animal will quickly become your best friend and a member of your household. Knowing the best methods of looking after him will assist both of you discover how to cohabit in peace. Keep reading[…]